Did ETs Use Scalar Technology 65 Million Years Ago to Kill Dinos by Ice So Humanoids Could Evolve to Meet Nibirans 400,000 Years Ago? 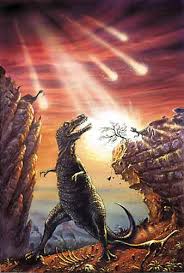 Birnes and Horn, in Ancient Aliens, Season 1, Disk 2 suggested ETs used scalar technology 65 million years ago to cause an ice age to kill off the dinosaurs so humanoids could evolve on Earth.

If Birns and Horn are correct, then allusions in the Sumerian literature that the Prime Creator planned for Nibiran miners to rocket to Earth.   400,000 years ago, so the plan went, the Nibirans would meet Homo Erectus, the strangely compassionate hominoid that had evolved on Earth since dinosaurs died off 65 million years ago.  The Creator’s plan called for the Nibirans to genetically engineer hybrids–us–with Homo Erectus (Earth’s most evolved hominid) to dig gold for them.

The Nibiran bosses on Earth–Enlil (Yahweh), Enki (Adenoi), Ninmah (Earth Mother) and King Anu of Nibiru identified the mysterious Galzu, who appeared in person and also in visions, as a messenger of the Creator.

NIBIRANS LONG AGO TOLD HOW LIFE EVOLVED ON...

I really appreciate the info I find it pretty compelling but the images of peoples in Africa(Egypt)being other than black,brown,tan,or any other than what the were…..peace to the world!