From ANUNNAKI, EVOLUTION OF THE GODS *

Solomon succeeded his father, King David, the Conqueror of Canaan.  Solomon ruled Judea from 967 to 927 BCE.  He enlarged Judea to include Baalbek in Lebanon and Palmyra in Syria.

Unlike David (his father) Solomon made Judea great–not by war, destruction, murder, and treachery–but instead extended Judea with peace, grandiose construction of a temple in Jerusalem as well as trade, diplomacy, and dynastic intermarriage.  He enlarged Judea to include Baalbek in Lebanon and Palmyra in Syria.  [Handbook: 194]

Solomon attributed his regal platform to a talk he had with Enlil-Yahweh. Solomon meditated at Gideon (in the “Tent of Appointment”), sacrificed to Enlil, then slept there.  “Yahweh appeared to Solomon in a dream and said, “Ask what I shall give thee.”

“Solomon asked to be granted ‘an understanding heart to be able to judge my people that I would be able to discern good and bad.”  He “asked neither for riches nor long life, nor the death of his enemies.“ He said Yahweh granted him “wisdom, understanding as well as riches and long life.”

Solomon, unlike his ancestors in Sumer, Egypt and Canaan, said that Yahweh wouldn’t actually live in the temple he’d build for him in Jerusalem.  Yahweh wouldn’t live, as did the “gods” [read “Anunnaki”] in Sumer, Egypt and the rest of Canaan. Solomon promoted the Jerusalem temple “as a sacred place for divine communication” a place where the regnant Anunnaki “god”, ie, Yahweh, “can hear each other.”

Yahweh told Solomon to house the command module of his rocket [shem] in the Temple. [Divine Encounters: 216-218]

Solomon “married his sister Sheba, who in Jewish apocryphal texts is Lilith [Ninmah], which means she was of Anunnaki descent, not a black African Queen, despite Jewish assertions. Every effort has been made to denigrate her to posterity in exactly the same manner as the Jewish Christians later designated Mary Magdalene), in order to hide her familial relationship to Solomon, an incestuous relationship which, as his sister-wife, was absolutely anathema to the Jewish Scribes and Priests” of the time the Jewish exiles wrote the Old Testament in Babylon.

Solomon’s sister-wife Sheba was “blackened” by the conservative bible-writers, meaning she was damned by God as in the last millennium all black Africans were said to be descended from [Noah’s son] Ham, the breaker of God’s laws.  By describing Sheba-Lilith as black the Jews could assert that, as a daughter of Ham, she was damned and because of her black complexion, her incestuous relationship with her brother would be hidden from posterity. [DeVere: 27]

SOLOMON’S TEMPLE
To ready, the Jerusalem site for the Enlil’s temple, Israel’s King David, whom Enlil forbade to build the temple, readied its site for his successor, Solomon.  David had thirty-three hundred foremen guide seventy thousand carriers and eighty thousand stonecutters in the hills as they took large blocks of quality stone for the Temple’s foundation.

Temple of the Mount Foundation Stones, Jerusalem, where several massive stones ‘under-pin’ the Temple mount.  Estimated to weigh around 500 tons each, they were found when excavations along the western ‘Wailing wall’ uncovered them. 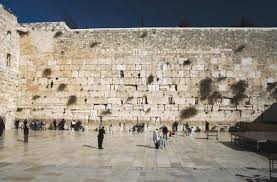 Solomon built Enlil-Yahweh’s first permanent temple on huge stones–too heavy to move and fit in place without Anunnaki technology (so we know that’s how the stones were moved) in 957 BCE.

The Temple’s east-west axis aligned with the equinox.

David gave Solomon a scale model and architectural drawings for the Temple.

Its east-west axis aligned with the equinox. David gave Solomon a scale model and architectural drawings for the Temple.

Solomon set the temple so the sun at dawn entered the Tabernacle at spring and autumn equinoxes.

The temple featured a 100 x 200-foot main hall and a smaller room for Moses’ Arc.  Solomon put the Ark on the rock where Abraham started to kill his son Isaac to prove himself loyal to Enlil.  The new temple replaced the portable one Moses made in the desert, local sanctuaries and altars in the hills.

The Temple complex had a large basin (called the “Brazen Sea”) 10 cubits wide brim to brim, 5 cubits deep, and with a circumference of 30 cubits around the brim on the backs of twelve oxen. The basin held 3,000 baths.

In 931 BCE, when Solomon died, Abraham’s descendants split their turf into the kingdoms of Judea in the south, Israel on the north.

In 835 BCE Jehoash, King of Judah, renovated the Temple, but in 700 BCE Assyrian King Sennacherib stripped it again.  In 586, Nebuchadnezzar, Marduk’s Babylonian King, sacked Jerusalem and destroyed by the Temple.

In 539, Cyrus of Persia, whom Marduk welcomed, conquered Babylon and returned Nebuchadnezzar’s hostages to Jerusalem.  Cyrus built the Second Temple from 538 to 515 BCE.

This second temple narrowly avoided being destroyed again in 332 BCE when the Jews refused to recognize Macedonian King Alexander as a god.  Ptolemies ruled Judea and the Temple from Egypt after Alexander died.

Seleucid King Antiochus III defeated Egypt in 198 BCE. He prompted a short-lived rebellion in 187 when he introduced Marduk-Zeus and the Greek pantheon into the temple. Antiochus IV Epiphanes again pushed the Greek gods for the Temple and,  Antiochwhen the Jews again rebelled and Antiochus again crushed them, he again forbade circumcision which marked Jews as followers of Enlil.  Antiochus banned the Jewish Sabbath, put a statue of Zeus in their temple, and had Greek priests sacrifice pigs there. When a Greek ordered Jewish priest Mattathias to perform a Hellenic sacrifice, Mattathias killed him.

In 167 BCE the Jews rose up behind Mattathias and his five sons to fight and win their freedom from Seleucid authority. Mattathias’ son Judas Maccabeus re-dedicated the temple in 165 BCE and the Jews celebrate this event to this day as a major part of the Hanukkah festival.

During the Roman era, Pompey entered (and desecrated) the Holy of Holies in 63 BCE, but left the Temple intact.

Herod the Great renovated the Temple in 20BCE; When Romans occupied Judea, they let Jewish priests run the Temple.  Then in 70 CE, Romans destroyed the Temple.

*Anunnaki Evolution of the Gods

Giant Humans, the Anunnaki from the planet Nibiru, bred, blessed, cursed, and challenged us. They came for gold to rocket back to Nibiru, powder, and float into their atmosphere to shield it from temperature extremes and radiation.

They gave savants advanced knowledge to share with us now. But they trained us to compete and hurt rivals, made us slave in armies, homes, and jobs. They imprinted dominator-consciousness on us. The Anunnaki shortened our lives, imprinted us to obsess on status and greed, and inflicted royals, religions, racism, sexism, slavery, taxes, gold lust, debt, murder, war, propaganda, and ignorance on us.

Nibiran King Anu ignored the treaty his predecessor signed that designated Marduk (Satan) A Nibiru’s next ruler. Marduk ran Earth until a new Nibiran King (Nannar) sent agents to Earth to wrest it from him. They now promise peace, free energy, and quantum computing. They hype harmony, urge understanding, emphasize empathy, and advocate disclosure. They returned to Earth to dawn Prince Enki’s (Aquarian) Age when we embrace individuality and unity free from the god-spell, nation-bane, materialist-compulsion, master-slave curse, god-devotee hypnosis, boss-worker hex, and lord-tenant model they imposed. Giant humans, the Anunnaki from Planet Nibiru, bred, blessed, cursed, and challenged us.

They came for gold. They grafted Homo erectus genes onto their genome to make us dig the gold for them.

But they
*imprinted dominator-consciousness on us,
*shortened our lives,
*got us to obsess on status and greed.
They inflicted
*royals,
*religions,
*racism,
* nationalism
*sexism,
*slavery,
*taxes,*gold lust,*debt,
*murder,
*war,
*propaganda, and
*ignorance on us.

More on the Gods of Old:

ANUNNAKI ETS FROM NIBIRU MADE, PROGRAMMED & ABUSED US BUT MAY NOW HELP US

MOST ANUNNAKI LEFT EARTH TO MARDUK AFTER ENLILITES...

Free Humanity: Break the Godspell of the Anunnaki...

Slide Show: Our Makers Wanted Us To Surpass...